Wow – I have to apologize. I can’t believe it’s been so long since I’ve written. Spring has been a difficult time for me personally and obviously it showed in my blogging. Lots of medical issues and personal stuff going on…but that’s over now. In more fun news, we now have two adorable puppies. Last week, I heard through the grapevine about a pup who was hours away from being euthanized. I knew that couldn’t happen, so with very little discussion hubby and I drove to a nearby town and brought home our little ‘rescue’ pup. He’s mostly husky, with some beagle (?) mixed in. He has meshed well with Lucy, due mostly to his laid back personality. He’s very easy going. His name? Well, since we had a Lucy, we had to have a …Desi. Get it? Okay, it makes me laugh at least. And it seems to fit him. We just don’t want any Little Rickys running around here. I’ll work on getting a pic of him posted shortly.

In papercrafting news (about time, right?), it’s been a dry spell for me. But I’m working on changing that. Things are in the pipeline…I’m working on graduation announcements for a friend, I have ideas for card holders floating around, and other items in mind.
First though – I don’t want you to miss this! You know its National Scrapbooking Month, right? In honor of that, Close To My Heart has an awesome special this month and it’s ALMOST GONE! We’re down to about 24% remaining and I know you’re all going to want this! 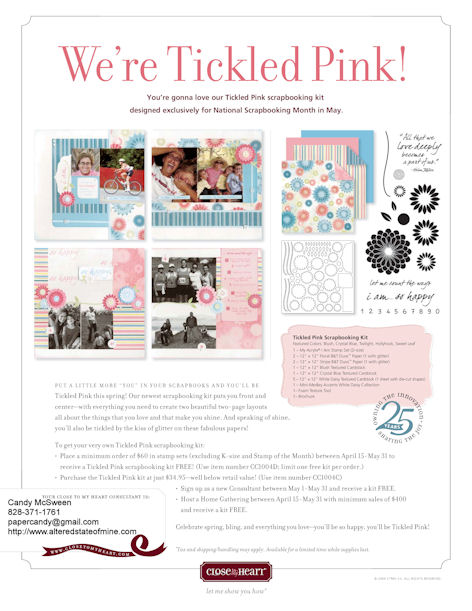 Please contact me ASAP to get this fabulous deal!! It’s adorable in person, I promise you.
I’m off to work on getting a pic of Desi as well as creating some fun items – you do the same!
« Close To My Heart Sale!
What a Great Father’s Day Gift! »