<I apologize for the lateness of this post – our internet has been sketchy for a couple of weeks now. I think we ("we" of course, is my hubby) have it under control…>

Okay, okay…I have had some readers asking me to share more menu plans. I’m trying to reach a balance with crafty goodness, menu plans and real life (which includes home schooling, church responsibilities, tax season for the hubby – which is always kind of overwhelming, and various other schtuff). So, bear with me? 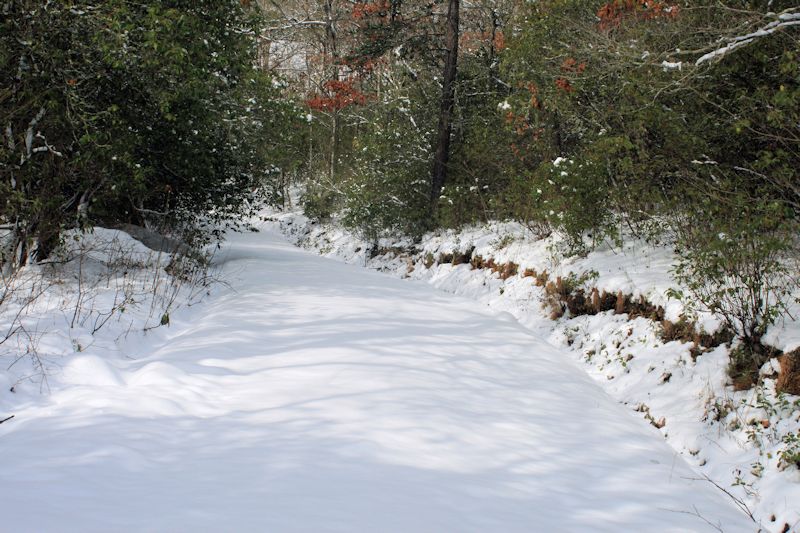 This week was a little weird for us. We had snow on Saturday, which was absolutely GORGEOUS! However, when it snows in NC, everything screeches to a halt until it melts. This isn’t a bad thing, necessarily. It just changes plans. So I had to change some plans around and adapt some. Which is easy to do, especially with a meal plan! That said – here’s what we ate, and what changed…

Saturday – to be completely honest, I hadn’t planned on a dinner for Saturday. Our oldest generally has worship band practice at an inconvenient time, which throws our schedules completely off for the entire day. I have been grocery shopping during this time, which coincides with supper time. So, we have been just grabbing something after shopping. The oldest often doesn’t get home until after 9:30 (I KNOW!!) and he eats then. He doesn't like to eat before practice. BUT, with the snow falling fast and furiously, we had to “Plan B” it.

Hubby worked the morning shift, so I tagged along. I walked uptown to our local crafty store, The Art Room and made a fun tag for their free make and take. This was my first time catching the free make and take – they have one most Saturdays, I’m just not in town to participate. And WOW – what a crowd! They open at 10 – I arrived a few minutes before. There was already a crowd gathered on the steps. But The Art Room was prepared! I took a ticket to ensure my spot at the “Art Bar” for the make and take and browsed the store until it was my turn. This is what we made: 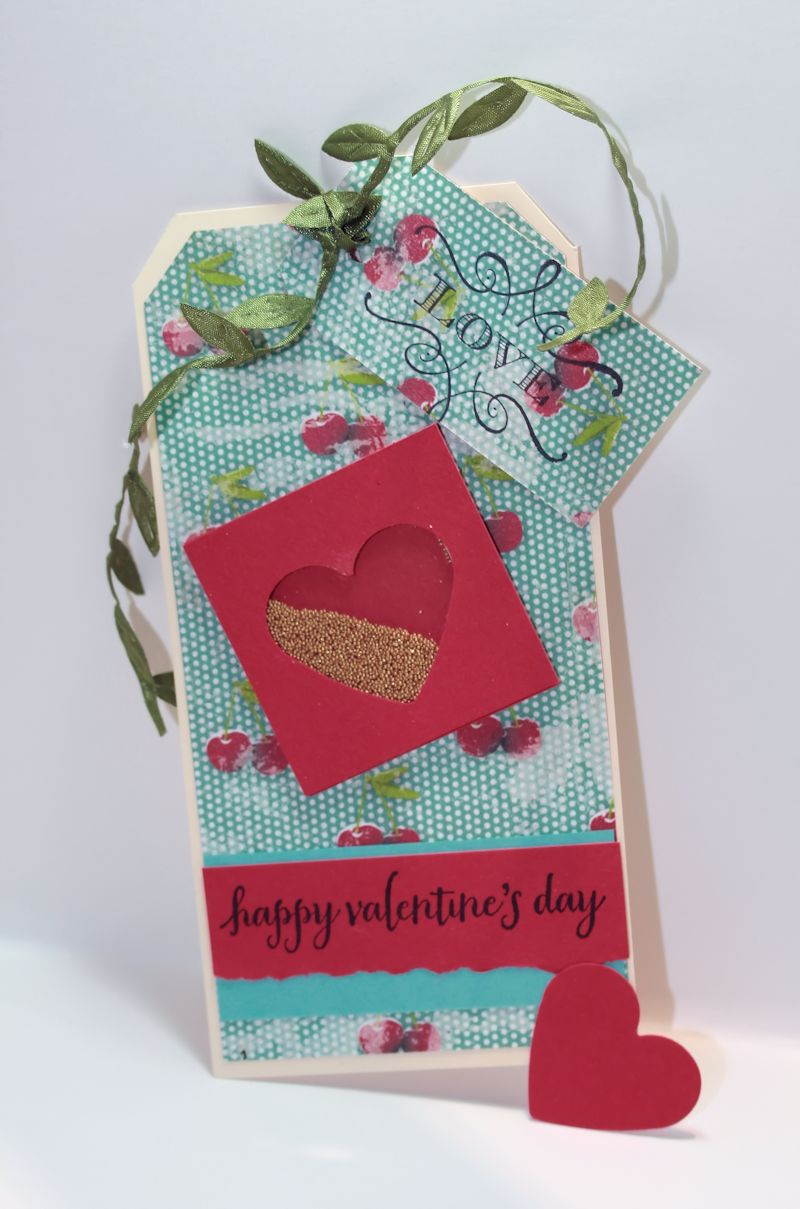 Then I hung out with the hubster until I needed to go grocery shopping. (Thankfully, I’d seen the forecast and figured I needed to adjust my shopping time, just in case.) Grabbed the groceries and added in extra cilantro. (I’ll share why in a later post.)

Long story short (too late?), we moved a meal I had planned for later in the week to have it Saturday night. We had one of my favorites – Gina’s Spaghetti with Sautéed Chicken and Grape Tomatoes. I usually try to save this one for summer, when tomatoes and basil are abundant, but I was craving it! So yummy…we also had some roasted garlic bread. This is super simple – just roast a head of garlic, mix the roasted garlic with your favorite butter (remember, I’m dairy-free, so it’s a vegan spread here) and a little sea salt. Spread onto a loaf of French bread and pop back into the oven until warm. I’m feeding a hungry teen and hubby, so I always have to beef up my meals!

Super Bowl Sunday – well…we were supposed to have a big Super Bowl party, with all our youth and their parents, as well as our church elders and pastor. Unfortunately, the snow looked like it would stick around when our youth leader made the decision to cancel. 🙁 And the snow completely melted before party time! But no worries, we still had a blast with just our family! We had “chicken bites”, which is an adaptation of a Paula Deen recipe. I know, Paula?? But as an occasional treat, her Sweet Chicken Bacon Wraps aren’t too terribly bad for you (they do involve bacon). And with our change, it’s actually nearly a health food! 😉 We made them without the bacon for our party – still yummy! Oh, and a warning? NEVER, ever substitute chipotle chili powder for plain old chili powder. 😉 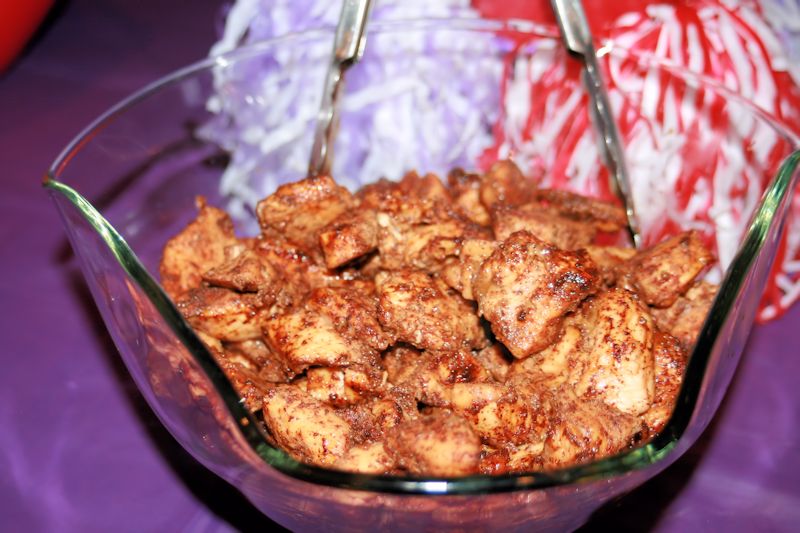 We also made corn dog muffins. What a fun treat! They were inspired by Iowa Girl Eats with dairy free modifications. I used the cornbread recipe from Whole Foods. 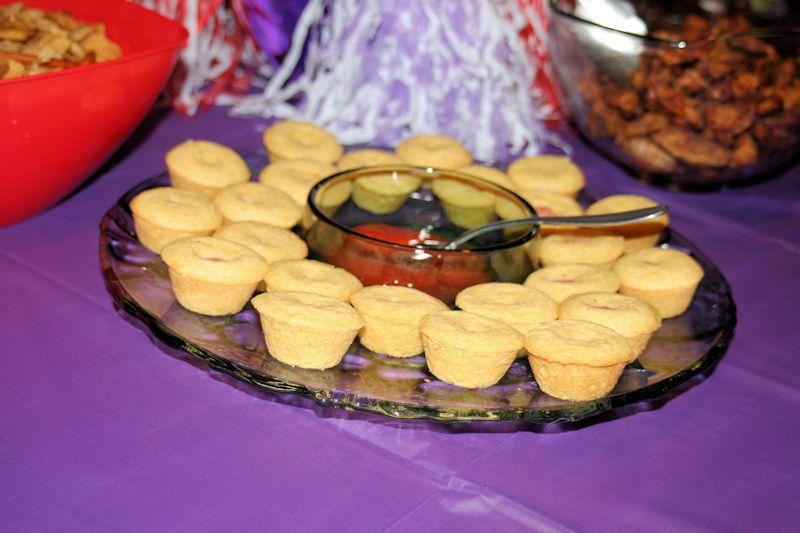 We made Chex Mix – always a favorite with the kids. We also made Oreo Football Cookies. Wow! These were easy to make and delicious! 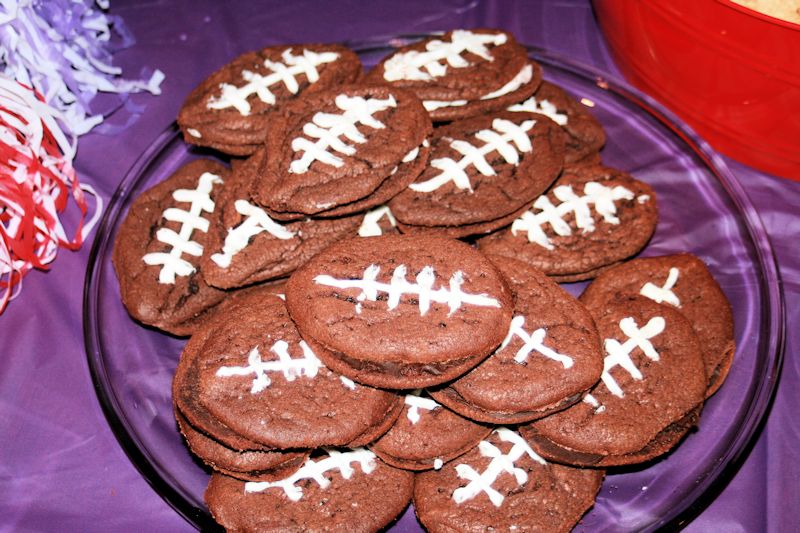 I made some guacamole to go along with tortilla chips and we had quite a spread! Oh, and the game was amazing too. 😉 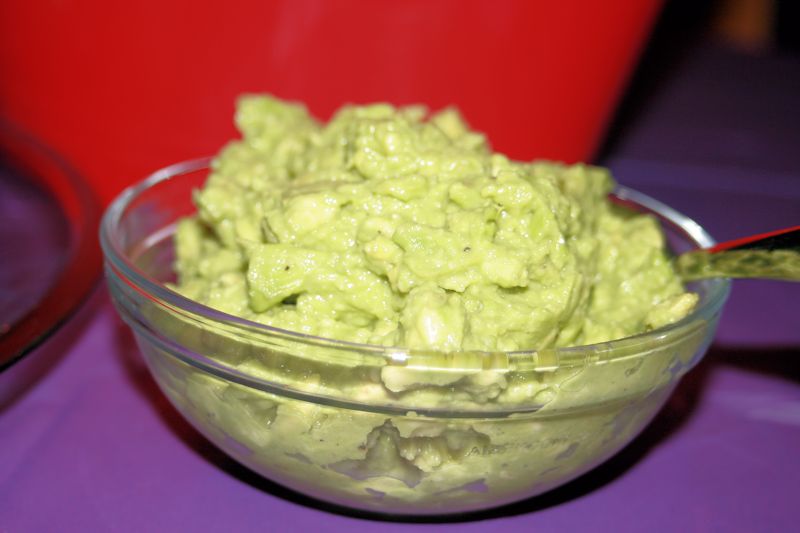 (Oh yeah, and these? Our “penalty flags” for when they called a penalty, we disagreed with the refs calls – or just felt like throwing them at each other.) 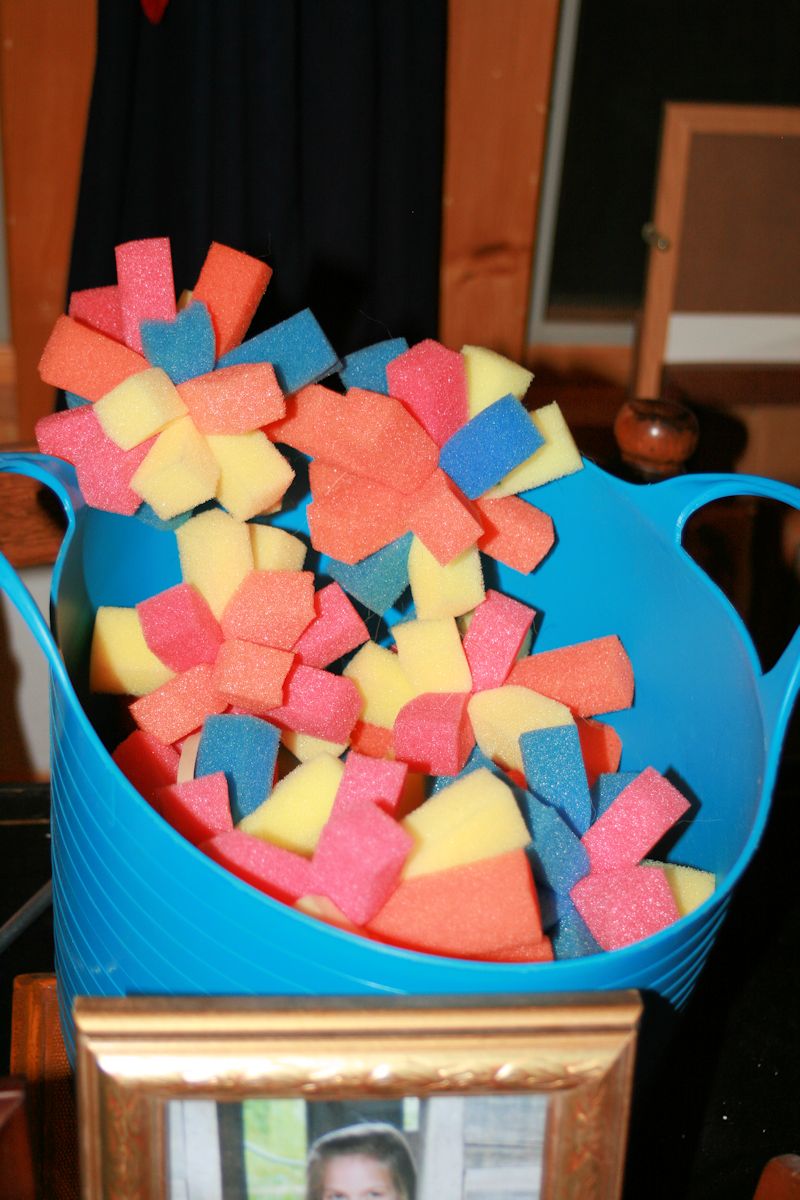 Monday – an oh-so-simple meal of spaghetti and meat sauce. I pulled some sauce I’d made a few weeks ago from the freezer. I make my sauce with crushed tomatoes, tons of garlic, some seasonings (basil, oregano, salt, pepper, and sugar). Usually, I add some Italian sausage I get locally that is AMAZING. My guys like meat. 😉

Tuesday – chicken and yellow rice with broccoli. OK. I know you’re going to want this wonderful recipe. I don’t have one. 😉 I made this up when the boxed yellow rice we used just began costing too much to feed the crew. I sauté some chicken (boneless skinless breasts, or use some pre-cooked chicken) until browned. I used coconut oil this time to sauté them, but you can use your favorite fat. Then I add rice (white or brown). I sauté the rice for a bit, until it starts to smell “toasty”. Then I add Sazon until it looks like the right color. If I were using the packets, I’d add 1-2 packets. We go through so much Sazon, I buy it in bulk. Add the appropriate amount of water for your rice, cover and cook until done. That’s it!

Thursday – I was out most of the day (kind of unexpectedly) and hadn’t planned a crockpot meal. So, we ad-libbed. We had hot dogs with homemade slaw. I know hot dogs aren’t great for you, but I still figure they beat a restaurant meal any day!

Friday – DATE NIGHT! No clue yet what we will have, but I guarantee we will enjoy ourselves.

So, there you have it – a real-life meal plan, complete with real-life changes and challenges.

« Simple Thank You Cards with a Bookmark
Mini Album with a Page Twist! »